I’m sharing this 3D scan and 3D printable model to thank everyone who has supported my ongoing Kickstarter campaign, Through a Scanner, Skulpturhalle

If you’re already a backer: Thanks! Thanks for seeing its potential, and for helping to make it happen. Here’s one of the British Museum’s gems to tide you over while we wait—and hope—for the Skulpturhalle scans to materialize. I’ll try to process and publish more scans I’ve already done at other museums while the Kickstarter is still running, to make my fundraising “updates” worthwhile.

If you haven’t heard of my project: My Kickstarter will suport me travelling to the Skulpturhalle Basel museum in Switzerland to 3D scan a collection of plaster casts of ancient Greek and Roman sculptures. Then I’ll edit them for 3D printability and share it all here on Thingiverse. If you like the models I’ve scanned and shared so far, and want to help me keep at it, please consider supporting my project, and tell others about it. Please take a look at the project site: http://ThroughAScanner.com 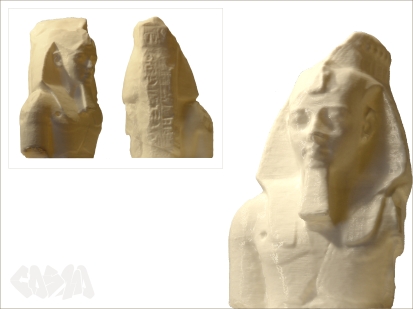 I scanned this piece at the British Museum in October, 2012.

From the British Museum:

Weighing 7.25 tons, this fragment of his statue was cut from a single block of two-coloured granite. He is shown wearing the nemes head-dress surmounted by a cobra diadem.

The sculptor has used a slight variation of normal conventions to relate his work to the viewer, angling the eyes down slightly, so that the statue relates more to those looking at it.

It was retrieved from the mortuary temple of Ramesses at Thebes (the ‘Ramesseum’) by Giovanni Belzoni in 1816. Belzoni wrote a fascinating account of his struggle to remove it, both literally, given its colossal size, and politically. The hole on the right of the torso is said to have been made by members of Napoleon’s expedition to Egypt at the end of the eighteenth century, in an unsuccessful attempt to remove the statue.

The imminent arrival of the head in England in 1818 inspired the poet Percy Bysshe Shelley to write Ozymandias:

I met a traveller from an antique land
Who said: Two vast and trunkless legs of stone
Stand in the desart. Near them, on the sand,
Half sunk, a shattered visage lies, whose frown,
And wrinkled lip, and sneer of cold command,
Tell that its sculptor well those passions read
Which yet survive, stamped on these lifeless things,
The hand that mocked them and the heart that fed:
And on the pedestal these words appear:
“My name is Ozymandias, king of kings:
Look on my works, ye Mighty, and despair!”
Nothing beside remains. Round the decay
Of that colossal wreck, boundless and bare
The lone and level sands stretch far away.

After its arrival in the British Museum the ‘Younger Memnon’ was perhaps the first piece of Egyptian sculpture to be recognized as a work of art by connoisseurs, who traditionally judged things by the standards of ancient Greek art.

This is not the sharpest of scans—the original is ten to fifteen feet in the air, so I could only shoot it from a distance, and at very low angles. The lighting wasn’t great either. (I’ll have much better access, lighting, and results in the near-ideal setting at the Skulpturhalle!) I normally wouldn’t publish a low-res scan like this, but the overall form is there, and unmistakable. And some of the hieroglyphs did come through. It makes for a nice, easy print so I thought it’d be worth sharing. (For higher quality scans more indicitive of what I’m shooting for at the Skulpturhalle, see these: http://thingiverse.com/CosmoWenman/collections/3d-scans-by-cosmo-wenman)

Because the original was made from a single piece of stone, there’s something scale-independent about the design, including the fracture. Even printed small, it looks plausible as a “real” object, as opposed to something like, say, a mini Eiffel tower.

I’ve printed two copies for myself so far, one at 1/20th scale and another at 1/10th scale (in two parts). It makes for a stately little print.

I don’t think printing it full scale is in the cards any time soon, but I would like to print one at least human scale. I’ll share those multi-part printable files here too when it’s done.