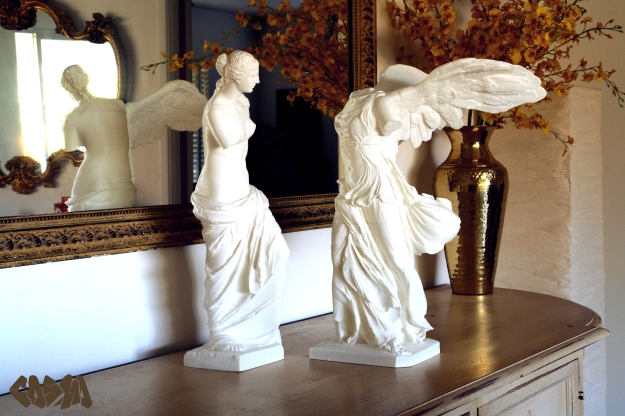 I spent a week in the Skulpturhalle Basel plaster cast museum in late September. I got some great 3D captures and I’ll start publishing them soon, starting with Venus de Milo and Winged Victory. Thanks again to the Skulpturhalle for giving me access to their collection, and to Autodesk and its Reality Capture division for their financial support, without which I would not have been able to undertake this project.

The Skulpturhalle’s plaster cast of Venus de Milo was commissioned in 1850, and was likely made by the Louvre’s own atelier. It is a very high quality cast, and I was able to get a very nice 3D capture of it. You can see a low-res preview of the model here.

The Skulpturhalle’s plaster of Winged Victory of Samothrace was made in 1892, and is documented to have been made by the Louvre atelier under the direction of Eugène Arrondelle. It is also of very high quality, and I got a complete, high quality capture of it. Here’s a preview.

Pictured above are two 20″ tall 3D prints I am currently working on. They will make their public debut at the 3D Printshows in London and Paris next month, and I will be publishing the 3D files shortly thereafter.

The Paris show is in the Carrousel du Louvre expo space, right next to the Louvre, which means that my prints will be a few hundred feet from the originals. I can’t think of a better venue.

In an interesting wrinkle, the Louvre just recently removed Winged Victory from public view for the first time in 130 years, for a nine month restoration. So my 3D printed copy will be on display just a stone’s throw from the Louvre’s Daru staircase, where the original will be conspicuously absent. The Louvre is soliciting donations from the public to support the multimillion dollar restoration project, which will include making a 3D survey of the original. I’ll be publishing my 3D data so that anyone can 3D print a copy. Will the Louvre publish theirs?

Here are snapshots of just a few of the pieces that turned out very well. A bust of the Borghese Ares, a bust of Homer, and Athena Velletri. 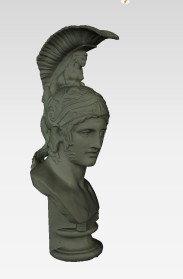 And while poking around in the Skulpturhalle’s storage cabinets, I stumbled on a piece that isn’t listed in their public catalog (which focuses on ancient Greek and Roman works). It’s an extremely high quality Italian plaster cast of a Renaissance treasure and work of political propaganda — an enigmatic Florentine icon of power and status. I captured it, but I need to work on it more and figure out the right way to present it. But it’s great.