This Slate story, What Was the Venus de Milo Doing With Her Arms? by Virginia Postrel describes a fun project she hired me to work on–designing and 3D printing a restoration of Venus de Milo’s missing arms, showing her holding tools, spinning thread in the ancient technique.

I started with my own 3D capture of Venus de Milo–the most accurate 3D model of Venus de Milo in existence, which I made from an 1850 plaster cast by the Louvre’s own atelier that is now housed at the Skulpturhalle Basel museum. 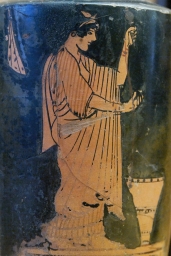 The pose and tools were modeled after ancient Greek painted vases and a few diagrams by archaeologist Elizabeth Wayland Barber and others, outlining this theory of Venus’ original design.

In thread spinning, the upper tool, the distaff, holds a mass of rough wool, and the lower tool, the spindle, is spun to twist and gather the thread into a finer filament.

I figured that the ball of wool on the distaff would be too heavy to have been made in marble, so I painted it gold as though it were wood, or a hollow, gilded bronze sphere. The thread would likely not have been wool in an actual life-sized statue, so I used a gold chain instead, and carried the gold motif down to the gathered thread on the spindle.

This gilding has a couple effects: it creates a physically plausible design, and draws the eye away from the novelty of the reconstructed arms, putting the viewer’s focus on the tools and the activity, where it would have been intended.

The gold is also a sleight of hand, in that it emphasises the question of how the tools and wool would have been presented–marble, gold, bronze, painted wood? Notice how we’re not talking about the new arms anymore?

(Here’s a theory, though: maybe she lost her arms because some dope did, in fact, put a 30-pound marble ball on the top of the distaff, and 20 pounds of extra weight from a solid marble spindle hanging on her right arm.)

There are several other theories about Venus’ original arms. Here she is next to Ares; holding laurels; holding an apple; holding a shield; spinning thread. Some theories are more convincing than others.

“On a serious note, vandals broke into the Louvre in Paris last night and attached arms to the famed Venus de Milo sculpture. Said the heartbroken curator of the museum, ‘I do not speak English.'”

I do like the version with her standing next to Ares, but mainly because I have also 3D captured that particular speculative reconstruction of Ares’ magnificent headdress

Most of these other conjectures look too much like after-the-fact attempts to work out some pose that makes sense of the awkward positions indicated by what little remains of Venus’ arms.

Spinning thread seems to me to be the only activity that actually requires this odd, specific pose. It is also one of the few that agrees with the drawing of her made by Jean-Baptiste-Joseph Debay in 1821, shortly after her discovery, which shows much more of her left upper arm still intact.

There are accounts of a marble hand holding an apple being found near Venus. But it is described as being of a markedly lower quality than the rest of the sculpture. Also, my understanding is that the person who first bought Venus on Melos was desperate to sell it, and to present it in the most fashionable light possible–meaning that the contemporaneous accounts of its discovery are not necessarily reliable. (And having just recently read Chasing Aphrodite, it seems to me that “contemporaneous” records of discovery might very well be the least reliable products of the antiquities trade.) In fact, the one thing we know with certainty about the Venus de Milo is that she’s not Venus. She may be Aphrodite, but even that is not certain.

All the firm-but-citation-free assertions in Wikipedia notwithstanding, the Louvre itself seems to discount equally all theories about her identity and what she was holding, possibly preferring to preserve Venus’ enigmatic nature. Which makes sense, as Camille Paglia explains: “Supreme western works of art, like Oedipus Rex and Hamlet, preserve their indeterminacy through all interpretation. They are morally ungraspable. Even the Venus de Milo gained everything by losing her arms.”

I was able to do this reconstruction because I had my original 3D capture of the Venus de Milo–which I’ve made freely available to anyone in the world. It’s a great example of the kind of adaptations people would be able to do if more museums made their 3D data available to the public.

But by far the most important take-away from this project is in the Slate story’s large, bold-text pull-quote about me: “I hired him…” You can too!