My replica of the 1st-century A.D. marble relief from Roman Libya, Three Dancing Nymphs, is shown above on the first day of its installation at the Frank Lloyd Wright Hollyhock House in Hollywood, California.

The Hollyhock House was Wright’s first project in Los Angeles; it is now a museum and a candidate for designation as a UNESCO World Heritage Site. The original marble relief was the most important piece in the Hollyhock House’s original owner’s art collection, and was the last major feature missing from the house’s recent restoration back to its original 1920s decor—in the photo below, the photograph in the upper right corner from the 1920s is one of the few references showing where the original was located. Now that it is on permanent display in the loggia, my replica will be the first thing to greet museum visitors.

I directed and produced the 3D scanning of the original at the Getty Center in May, 2016. I used that data to robotically mill a slab of plaster, then hand carved additional details and hand painted it to look like marble. After its installation, the curator of the Hollyhock House sent me a nice note, writing, “from start to finish you have made an amazing copy. The file scans… to the milling and adjusting process, to the coloring all came together in a most amazing manner. The result is rather like perfection. I think our visitors, without really knowing, will instinctively know this too.”

The original marble is thought to be a Roman copy of a lost Greek original. It is owned by the Santa Barbara Museum of Art, and is on long-term loan to the J. Paul Getty Museum in Los Angeles. It is installed in the Getty Center’s West Pavilion alongside 17th-century neoclassical sculptures, illustrating the interplay between old and new—originals and their derivatives, copies and their inspirations. It’s a process of iteration that is thousands of years old and now extends, again, to the Hollyhock House.

This project was done in cooperation with the Santa Barbara Museum of Art, the J. Paul Getty Museum, the Los Angeles County Museum of Art (LACMA) and the Barnsdall Art Park Foundation, which operates the Hollyhock House. 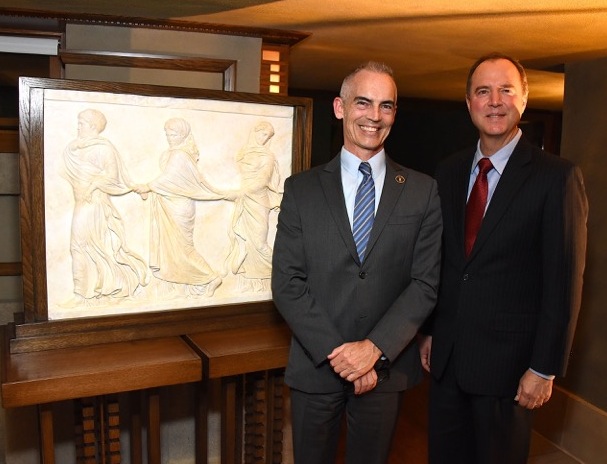 Los Angeles City Councilman Mitch O’Farrell and US Rep. Adam Schiff with Three Dancing Nymphs replica at a reception for its unveiling at the Hollyhock House, November 9, 2016, via LA Independent